Daly City is the 9th most densely populated city in the entire country. And, the City experiences one of the highest pollution burdens within the County of San Mateo. We need trees in our urban environment now more than ever! Help make Daly City greener, cleaner, and more resilient - for generations to come!

Sign up to adopt a free tree or volunteer to plant trees and rain gardens. Email projectgreenspace@dalycity.org with your name, home address (please list if you are the property owner or tenant) and where you would like to plant a tree. Program is currently on hold due to the pandemic, but waitlist applicants are still accepted.

The Daly City Drought Tolerant Tree Guide provides profiles with photos for over 70 tree species uniquely adapted to Daly City's coastal climate. Please get in touch if you have questions about species that would work best for your location. The City is always accepting feedback on tree species to add to the Guide. 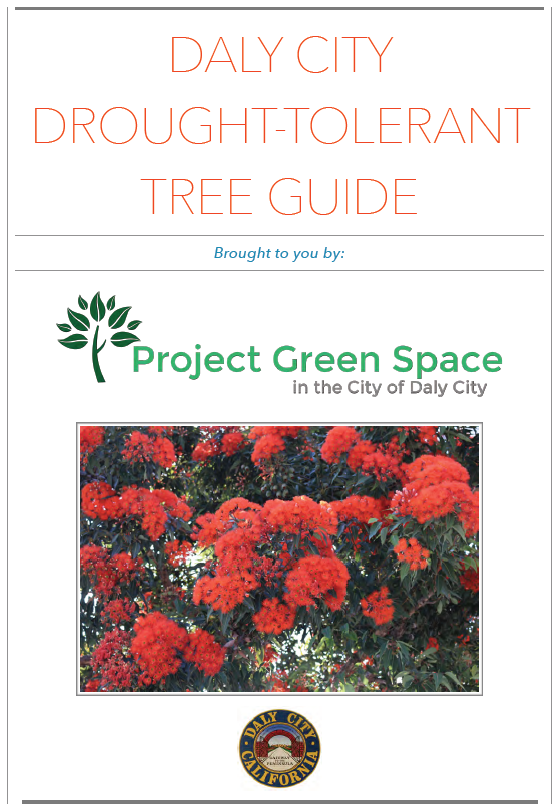 As the largest city in San Mateo County and the 9th most densely populated in the country, Daly City is truly an impervious, concrete jungle. The urban canopy is estimated to cover less than 5% of the land area. Vegetation that does exist is largely introduced ornamentals and invasive species. Urban trees have steadily declined from drought, disease, and damage. Our new climate reality of increasing drought conditions destabilizes the landscape and can lead to localized flooding, landslides, and accelerated cliff erosion, especially during increasingly intense weather events that are projected under climate change.

Project Green Space has kicked off what will become decades of work to green urban spaces in Daly City. The City will rely heavily on all of you to help make this happen as volunteers in your communities. Does your street need trees? Do you know of vacant land that might be a good planting site? Want to help spread the word about the benefits of trees?

We welcome you all to join Project Green Space.

Urban trees have tremendous value for public health, neighborhood beautification, and climate change mitigation and adaptation such as:

Essentially, trees act as a form of insurance against the impacts of climate change and pollutants. Without them, we are completely exposed.

Our current urban forest consists of 7,415 individual trees that have a combined estimated value of $18,802,720! This valuation, however, does not account for all of the myriads of benefits that trees provide.

The chart depicts the top 10 species in Daly City. As you can see, the top three species account for almost half of all our trees! The most widespread tree, the Monterey Pine, is dying off from a pitch canker disease, which spreads quicker in drought conditions. This species alone, some 2000 individuals, is estimated to be worth $5,000,000 to the City. Our next two predominant species, Monterey Cypress and Eucalyptus, are each valued between $3,000,000 and $4,000,000 each! 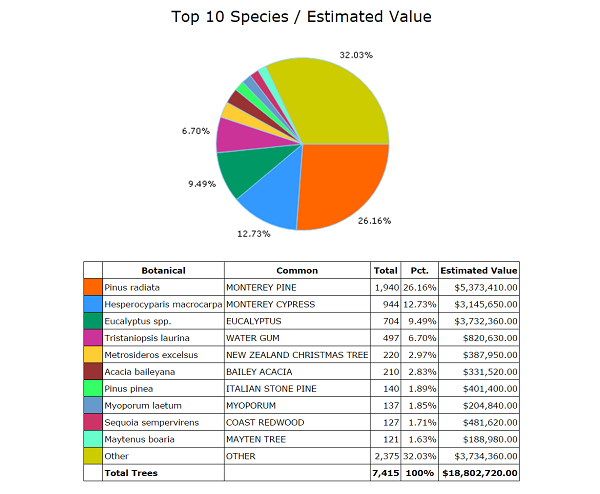 Overall, we do not have a diverse urban forest and this has much larger implications for long-term resilience. Forests that are not diverse succumb to external shocks quickly, like disease, drought, and storms.